Welcome to my Neighborhood


My family and I live in an apartment complex, this is the first time I've lived in an apartment since I was in my 20's.  Chris and I moved out of our townhouse apartment when our daughter was 3 months old.  She is now 9 years old. That's a long cock time! We've lived in houses ever since we moved from that apartment.

Rent includes water.  I had no idea how many cocksuckers here are on city water and you actually have to pay for it.  I've NEVER paid for water before.  Yes, I know that I am paying for my water, but.. I did not have to put a deposit down.

Living in an apartment complex when something breaks it gets fixed quicker than dealing with a clit-sucker landlord that most of the time live out of the area.

There are a few other reasons why we ended up in this particular apartment complex instead of another.  Reasons I would rather not discuss here. But, the number one reason was money!  We were able to move in here very quickly for less than $500!  Awesome right?.. sure but, you get what you pay for right?!

This is an over view of what I see every single crap-tastic day we live in this neighborhood.

I seriously think a drug lord lives across the sidewalk from us.  He is constantly getting all kinds of crack-sniffers all times of day and night.  I rarely see the same person more than once.  The guy which I will refer to as Mr. D.L seems to be nice, he always waves and says hi to me when ever I see him.  He even bought Girl Scout cookies from me a few times.  I have no idea what his name is, and I really don't want to know. 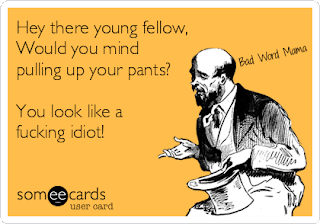 A new couple just moved in also across the sidewalk in another apartment.  It's a guy and girl who live there, they look like they are in their 20's.  The guy is short and skinny and for some reason he refuses to wear a shirt!  Not only does he walk around shirtless he also, wears his pants under his ass! Really!! Not only do I have to look at your pimply back I have to see what fucking color underwear you have on!  I guess I should be grateful he wears underwear, I betcha his ass matches his pimply back.  This guy has a bowl haircut. Who the shit is this guy?? A cool guy with a cum-tart haircut? Or, A cock waffle trying to be cool?  I can tell you what he needs to try a little harder!!
He is also a frequent visitor of Mr. D.L.

Then there's the lady who I call "Nubby" I've talked about her before. She likes to bum cigarettes off me.  She never wears shoes and I know for sure she never brushes her teeth because she only has black nubs left. Hence the name "Nubby."  The other day I was sitting outside smoking a cigarette and just enjoying the quiet and I noticed 2 birds playing and chasing each other. Well one of the dumb birds was confused and saw his reflection in a window on my apartment and smacked right into it.  That damn bird fell right into my lap! I of course screamed  like a carpetmuncher was after me, and the bird fell to the ground.  After I screamed I noticed Nubby came running outside, she heard me scream because she likes to keep her door open.  I asked her nicely if she could help me with the wounded bird.  I saw her pick up a dead squirrel once so I knew she wouldn't be a pussy about it like me.   She rescued me from the what I thought was a dead bird.  Then she asked me for a cigarette.  Since, she did help me out, I gave her 2.  Later, she told me that the bird was okay and it flew away.  Awesome!!

One, older gentleman lives in a studio apartment right by mine. He keeps to himself and never speaks. He is probably in his early 60's.  He drives a older Mercedes Benz (Yes, I know way too much) Anyway, he seems to be home all day long, but in the early evening I will notice him leaving.  He is always dressed very nicely and he always has an over night bag with him.  Sometimes this includes a garment bag. What the hell does that cootercraker do for a living? I think he may be a gigolo or something.  And, if he's a "cum guzzler" what the hell is he living here for?  The rent isn't low by no means, but the neighborhood sucks.  My goal before I move from this place will be to find out what that man does for a living.

There's a guy who has parties every Thursday night and I can't get over the sight of some people who attend his parties.  Most of the guys who attend, yes have their crack jack hanging out and the girls, well they are wearing bikinis! Why the hell are they wearing a bathing suit, we don't even have a pool here! I refer to them as cumdumpsters. Not to mention his parties are at night. Why the hell are they wearing bikini's at a party with no pool?  Call me old but I just don't get it.

The lady who lives next door to us watches her 2 year old grandson everyday and a multiple of older children, who I wonder why aren't in school.  Our nap times do not coincide, I can hear those little sucker running and jumping the whole time I'm trying to get my little ones to take a nap.  My bedroom wall is shared with their living room.  Andrew becomes extremely annoyed when he hears this, he starts banging on the wall and yelling "Stop jumping, I try to take a nap here!"  I actually would rather them play inside, every once and a while she lets them play outside.  I can hear everything from my bedroom window. They constantly scream and yell to each other in  Spanish and I can't understand a word they are saying. I don't know if I should get up and go outside to see if they are hurt or tell them to shut the fuck up!

Our lease is up in November, I think I will suck it up and pay the water deposit!! 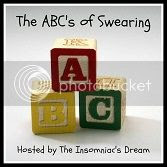 at 9:37 AM
Email ThisBlogThis!Share to TwitterShare to FacebookShare to Pinterest
Labels: dumb ass people, my life