My son Andrew is obsessed with SpongeBob Square Pants show.  To be honest, that's really the only cartoon I can stand to sit and watch.  I never realized how much my son pays attention to the shows he's watching.  Well, until he did something that, uh I was totally speechless.

This made me wonder what other T.V shows have going on. 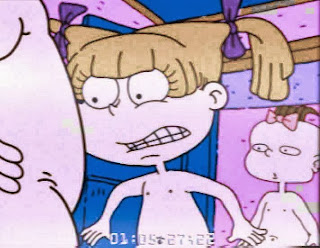 These are just a few I found, that I know my kids watch.  Are you wondering what brought all this on?

I was getting Andrew out of the shower, when he said to me:  "Hey Mama, meet my new friend Squidward."
He pushed his pelvis area out while he introduced me to Squidward.

Come to find out, when he looks down at his kibbles and bits he sees this:

After much laughter from me and trying to get him to stop making his Squidward from flopping around while Andrew jumped on the bed, I wondered what else he sees while he's watching T.V.  I did a little research and come to find out there is a lot!

So, I have a battle to choose here,  do I not let him watch T.V anymore?

Now, before you judge my parenting skills, they both know that many of the words they hear on these shows they aren't allowed to say.  Andrew will hear someone from SpongeBob say "stupid or dumb."
He will say  "Oooh Mama, Mr Crabs just said a bad word."  So I'm not really that worried.

Who cares that he named his penis, most men do that anyway right?
Do many men talk to them too?  Hmm.. maybe I should talk to him about that.

at 8:15 PM
Email ThisBlogThis!Share to TwitterShare to FacebookShare to Pinterest