A friend told me about this, and a friend told her.  It's these postings on Craigslist, that are way beyond selling a bed or grandpa's old rock collection.    These are real postings from real people who have what I would call odd sexual requests and fetishes.  Who am I to say that these are odd?  Obviously, I'm a bit vanilla or have been living under a boulder.

Initially, I wanted to copy and paste the actual postings on my blog.  After some research I think it's not allowed and damn if I want to be sued by that website.  So what I'm going to do is, in my own words list fetishes I never knew existed and shit I would never do. 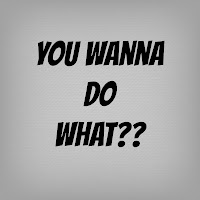 1.   When Chris gets home from work I have absolutely no desire to take off his work boots and sniff and suck on his sweaty stinky toes!

2.  I'm not sure why watching someone pissing and shitting themselves is a turn-on. But this lady is "dying" to host a party!

3.  The word smother scares the shit out of me.  Even when being tickled too much I lose my breath and feel like I might die. So, the thought of someone smothering me with their toes, feet and sitting on my face, I can tell you I will freak the fuck out!

4.  A guy who says his fetish is watching someone clean his house and do is laundry with no nudity or sex.
I call bullshit! That's not a fetish that's a lazy asshole!

5.  I almost projectile vomited when I read that a man is looking for a woman, any women married or single to visit him during her menstrual cycle.  He will not have intercourse only give her oral!

6.  When you think of playing a video game do you also think of getting "slammed" from behind?  Um, me either!  This guys is looking for a woman who will play Super Mario Brothers and who can also fake an orgasm while he's busy from behind.  He is very specific about what will happen at the end of each level!  WTF!!

7.  What does it mean if a man only wants foreplay and insists that there will be no sex?  Is he really a man? Is he so big he hasn't seen his winky dink in years?  Ugh. I'm grossing myself out!

8.  I thought men did their personal deed alone.  I guess I'm wrong though.  I'm seeing many, many ad's who want to be watched while do this to themselves.  They don't want the other person to touch them or even talk just to watch.

9.  I would call this abuse.  Apparently some people consider this a foot fetish.  A man looking for a person who will kick and trample on him with bare feet.  Oh and he also mentioned that he can be used as a toilet!

10.  I believe this gentleman has Mommy issues!  He's looking for an older woman (didn't specify age) who will bath, breastfeed and tuck him in.


I'm a pretty open minded person.  Although, a few of them grossed me out but I was really shocked to read some of these.  The one's listed above are no where near all of them posted. There are hundreds of them.
I know we've all heard of a golden shower, that one is mild compared to what some people are doing now-a-days.

I read these to Chris and thank god, he thought they were all weird!  Well except for #4!

Thanks for reading and I hope you got a good laugh out of this.

at 11:42 AM
Email ThisBlogThis!Share to TwitterShare to FacebookShare to Pinterest