Hey all, I know it's been a while since I've written a post, but before I give you my lame-ass excuse for not writing first I want to talk about my new year's resolution.

I normally don't make resolutions, because I have absolutely no will power and I never, ever keep them.

But, if I do make a resolution or a promise to myself, I try to make it small so that if and when I fail it won't be a big deal.  I know I'm just setting myself up for failure.  Yeah, who the shit cares! 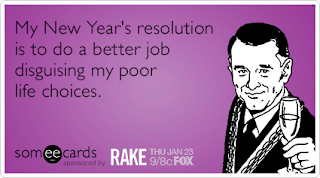 Come next August I will hopefully be returning to the work force and I won't be able to sit on my ass all day watching "The Price is Right."  I know I will regret not using my free time for something I really, really want to accomplish.

So you want to hear my lame-ass excuse for not writing my blog?  Well, too damn bad, I'm gonna tell you anyway.

There are a number of reasons actually:
I've been non stop reading
Kicking some Candy Crush Ass
Cleaning like and OCD freak
Napping

So there you go, that's what's been so damn important.  Actually, it is very important for me to be inspired by something to be able to write about it.  A day doesn't go by that I don't think about my blog and what I should write about.  But, the way I see it is, if I'm not interested in writing about it, why would someone want to read it.

Because of my bullshit, I've lost quite a few readers, which is okay I guess.  I don't like waiting on people either.

So, do you make resolutions?  If so, do you keep them? 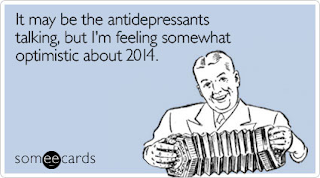 at 7:22 PM
Email ThisBlogThis!Share to TwitterShare to FacebookShare to Pinterest