Welcome to the Tales from the Trailer Park, if you're new here you can catch up by clicking the sign below. 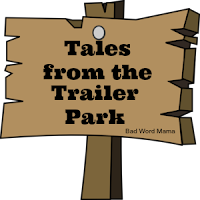 If you're caught up on this series I've told you before both my parents were older.  My dad was 55 years old when I was born.  I was his 3rd child, he had 2 other children from a previous marriage.

So, you know I grew up in a trailer and we had a kick ass pool in the backyard.  I think I was around 12 years old and a freaking tornado hit our house.  One minute we were outside playing and the next minute my mom was screaming at us to come in the house.  I remember it getting really windy outside, what kid doesn't like to play outside in the wind and pretend to be flying.  Just me?  I still love being outside when it's windy.  All that hair blowing makes me feel pretty.  Anyway, we came inside and we were instructed to get into the hallway.  I remember hearing the wind and shit making screeching noises and that's about it.  It only took a few minutes and we were back outside.  We noticed that the damn tornado took half our roof with it.  Well, it didn't take it too far just hanging off the back of the house.  It pulled our antenna damn near off the house as well.  After careful consideration from my dad he realized that the freak of nature didn't do enough of damage.  With help from my half brother they proceeded to pull the antenna off the house and "made" it land into our pool!  I had no idea what the hell he was doing, until later.  Yep, you guessed it, he wanted more money from the insurance people.  I think that was about the time we got cable.  Sweet!!!! - Although, we had to say goodbye to the pool.  He never replaced it.

I can never remember my dad working. So, while mom was working he was home taking care of us.  He was a typical bored retired man.  He was so bored he bitched about anything and everything that caught his attention.  The top 2 things he would bitch about. One, if you dare did more than one load of laundry a day.
He would go ape shit if he found out, and let me tell you what.. he was home and bored so he noticed. The next thing was if you ripped a paper towel off the roll and left a wet mark on the towel next in line.  I never understood why that bothered him so much.

I always wondered why my dad never did the dishes when I was younger.  My mom taught Shawn and I how to wash and dry and work together to get this task done.  My dad bought my mom a dishwasher one year.  It was a weird one though, it was some kind of portable dishwasher and you had to hook a tube to the sinks faucet.  I think he let her use it once!  Anyway, in my late teen years my dad decided to start pitching in and do some house work.  He would wash the dishes after dinner and then about an hour later, I noticed my mom doing the same dishes over again.  I inquired and found out that there was a reason why dad didn't do dishes.  It wasn't because he was lazy or felt it was a woman's job.  He freaking sucked at it!
What I found out was, my dad only washed the part of the plate that the food was on.  He said,  "We don't eat on the bottom or the sides of the plate, why should I clean them."
Then, I watched him one day and holy crap he didn't wash those area's of the plates and he decided that soap was not needed if you just used really hot water.   Mom finally put her foot down and forbid him to ever do dishes again.

at 12:21 PM
Email ThisBlogThis!Share to TwitterShare to FacebookShare to Pinterest
Labels: Tales from the Trailer Park