I have been in such a writing and reading funk lately.  I haven't even wanted to converse with anyone on Facebook for the past few days.  I've been laying in my cool dark room watching Vampire Diaries or playing the blasted Candy Crush!  I think I was a little disappointed about my last post.  I started a series here on my blog, it's about all the crazy, stupid ass adventures I had growing up.  I loved the post and the story, it even makes me laugh.   I think I was disappointed because I thought other people (my faithful readers) would find it funny as well.  I'm not going to let my insecurities stop me though.  I still plan on publishing the series every Tuesday.   Only an hour ago, I had nothing to write, nothing I  felt compelled to share with all of you.  Then all of a sudden while watching my kids play in front of me, I was inspired, it was like I was bitch-slapped with love and giggles.  Sounds nice huh?

My daughter Emilie spent a few hours in her room playing and gluing shit together.  My daughter thinks she has no imagination, but I know she does.  Andrew and I were sitting in the living room watching Tom & Jerry and Emilie came out and announced that she made a board game that she wanted to play with her brother.

Andrew, was so excited, he loves when his Sissy is in just the right mood to play with him.

Emilie walks out with her "board game" which consisted of notebook paper glued together with colors and drawings all over it. 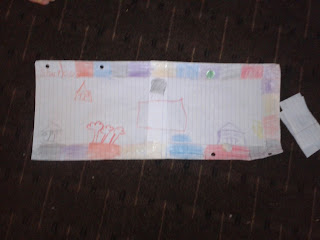 So they sat there playing, and I watched while Emilie let Andrew win two games in a row.  Wow, what a nice Sissy!  He was ecstatic  he jumped and kicked with excitement that he won!
Boy, he was rubbing it in good. Well, he got a little too cocky and Emilie decided "game on!"

She won the next 3 games and Andrew was pissed!!  He refused time after time he wasn't playing her "stupid game" anymore!  But, he always went back, hoping and praying he would win again! 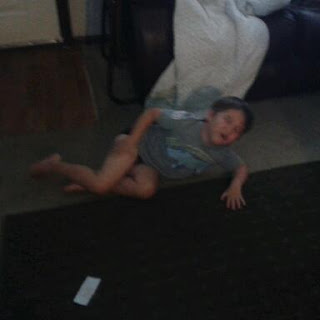 Soon, he realized that he was not going to win and got really pissed.  He did the only thing he knew how to do.  Tackle Sissy! 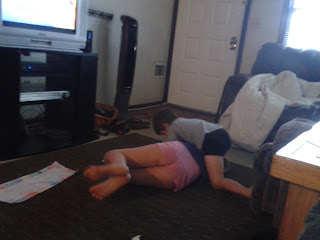 I know it's wrong, to let him be a sore loser and to think he's going to win every single game.  I did give him the speech about being a good sport and all that shit. But, he's only 3 years old, he just wants to win.

Are you thinking what was I doing while my kids were wrestling on the floor?  Well, I was laughing and taking pictures!  What else was I supposed to do?

at 5:17 PM
Email ThisBlogThis!Share to TwitterShare to FacebookShare to Pinterest