I think I'll call her nipples


We had nothing planned to do on a boring Sunday afternoon, so we decided to go a few towns over and visit something called a "Splash Pad."

It's not a very big area, but it's a free and cute little place for the kids to go cool off and play.  Didn't realize that the parents can actually strip down to their bathing suit and cool off too.
What I like most about it is that it's right by the river.  I love hanging out by the river and watching the dolphins play. 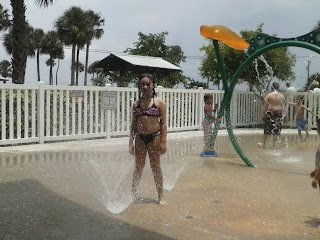 Anyway, Chris and I are sitting on our little bench watching the kids play and have fun.  Well, because I can't sit there and watch my kids every move I have to watch other kids and parents.

There are a few things that I witnessed that I shook my head at.

First thing I noticed was this dad playing with his little girl. She was probably 5 or 6 years old.  So, I couldn't help but to watch him play with her.  It was cute how much he played with her.  It made me smile for about 2 minutes.  Then, I couldn't help but think, why the hell is he playing with her so much?  My first thought was he must be a single dad and only has her for the weekend.  That's cool.  But, what aggravated me was that she clearly wanted to play with other kids.  Every time she would walk or run away from dad and try to play with another kid, he would call her back.   What the hell?  He did this the whole time!  I wanted to yell to him. "Yo jack-ass why don't you let your kid play with someone her own age, and go put a damn shirt on will ya?"   But, of course Chris frowned upon it so I had to keep my mouth shut.

I was so aggravated by watching this I turned my attention to a mom who came in with 2 kids in tow.  One kid was probably around one, and the other I would say 7 or 8. Mom had on a black and white bikini, she looked cute, well that's until her nipple popped out of her bathing suit!

Wouldn't you know I missed the show!  Chris filled me in though, he caught the whole thing.  She was cooling off under one of the sprinkler things and rubbing her body seductively and all of a sudden she pulled down one side of her bikini top and showed me her nipple.  That's the story Chris told me anyway.  I think it made him feel good about himself, so I let him think that she showed him her nipple.
I even pretended to be mad about it, "That whore, I'm gonna go say something to her."
He called my bluff. 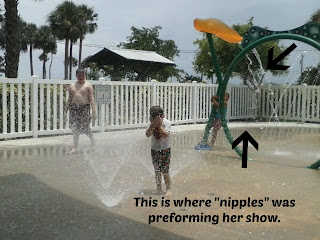 So, same lady after she did her strip tease for Chris she picked up her toddler and pulled off his diaper and put him under one of the sprinkler things too.  I had no problem with that, well until her older child decided, since his little brother was naked he should be too.  He ripped off his swim trunks and started running around naked!  Andrew came up to me letting me know there was a naked little boy running around.  Thank god nipples saw right away and made him get dressed again.  I wondered what it's like at their house?  Is it okay for them to all just be naked all the time?  Maybe they have "naked Sunday's"  and they forgot they were out in public and us regular folks prefer other to keep their clothes on!

Is it bad that I noticed that my 3 year old is more of a "man" that the bigger kid is?

Okay, so that was my Sunday afternoon well at least about 2 hours of it.

P.S.
Chris took these pictures and it doesn't show the whole park.