When we moved here, I knew one person a good friend, Kyley.   I was very nervous about moving away from friends and family.  I was even more nervous for my daughter Emilie.  She would only know one person as well, my good friends’ daughter.

Before we moved, my friend Kyley asked me if I wanted to sign Emilie up for Girl Scouts.  I immediately said yes, I thought it would be a great way for her to meet new people outside of what would be her new class.
Also, maybe I could meet a few new people myself, other Mom’s, makes perfect sense right?

Oh boy how I was so damn wrong!

We went to meeting after meeting, where all the girls sat around table and listened to the leader (who I will be referring to her as the troll) talk.

She would talk about how Girl Scouts were founded and the promise they had to memorize.  They would sit and color pictures while the troll would make smores in her oven.  I would watch Emilie as she sat at her table looking bored out of her mind, wondering why she is being treated like a preschooler.  She would color, she would do everything asked of her.

Emilie is a very shy girl and she doesn't like to talk in front of other people.  Sometimes the troll would call on Emilie to answer a question that she asked.  Emilie would immediately freeze and I could see the tears forming in her eyes terrified that she had to talk in front of others.  I would notice that the troll would roll her eyes when this would happen.
I never said anything; I know I can’t keep my sweet little shy, stuttering girl in a bubble forever.

The troop decided to join the counsel on a camping trip.  I agreed Emilie would go, granted she has never gone camping before.  She’s never even been inside a tent before.  I know she would have a great time.
The camping trip would consist of sleeping there for 2 nights.
Hmm. This causes a slight problem for me.   I can only spend the night one night.  (Mind you, I gladly paid for both nights)  I let the troll know that I had a toddler at home that I've never spent the night away before. A toddler who freaks out when I leave to go to the bathroom.  Chris is a great Father, but he’s not the Mommy.  I decided that Emilie could go for both nights because I trusted my friend Kyley to make sure she would be okay without me.  Emilie has always been fine spending the night with out me.

I let the troll know that I would only be spending one night with them.  I would come on Saturday early afternoon, spend the night, help the troop clean up, and leave on Sunday.  I thought it was an okay plan, Emilie was fine with it.  Kyley was fine with it, even the troll had nothing to say.  Win, win! 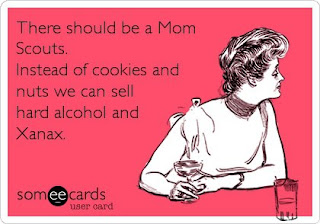 Fast forward, to the dreaded cookie selling time. God, I dreaded this part of this organization.  I hate selling things.  When we had our meeting, I made it very clear that the only people I know in this town are the ladies in our troop.  Who the hell would I sell these cookies too?  They certainly aren't going to buy my cookies they have a shit ton of their own to sell.

I managed to sell 2 boxes to Emilie’s teacher.  Because, I had only sold 2 boxes, I agreed to do 2 cookie booths even though I was only required to do one.  I felt bad because I didn’t sell any cookies.  Even the co-leader did at least 3 booths herself.
The troll, because she can’t do anything by herself she only did 1 booth, even though she was supposed to do more.  It is her troop right??
She through a fit because Kyley the co-leader did her 3 booths and didn't want to do anymore and she was busy that specific weekend.  So troll didn't do her booth because she didn't get her way. 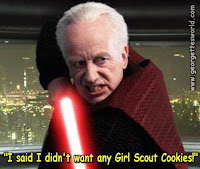 Can I remind you that the Mom’s in this troop are adults all over the age of 25.

Our last meeting troll announced the troop would be using our earned cookie money to go to Nickelodeon Hotel for a weekend.  The girls would still have to pay money to go, it was originally $15 and bring a snack to contribute.  And the Mom’s would have to pay something too.  Okay, I was fine with that.  At the same meeting troll handed out the left over cookies that weren't sold to all the girls and told them that if they weren't sold they couldn't go to the trip.

Really?!?   I told the troll, well I will try, but we live in an apartment complex and most of the people I've seen are kind of sketchy and I don’t want my daughter or myself walking up to strange people begging them to buy our cookies.

I started with 12 boxes cookies to sell and I managed to sell 4 boxes to the stoner who lives across from me.

“Dude, these lemon cookies are sooooo good.” he would pay with a shit load of sweaty quarters.

First reason is that I didn't sell enough cookies, the person she said this too stuck up for me saying well, she told you she didn't know anyone here and she did 2 cookie booths.  Troll, said, cookies booths don’t count for shit!! This person also said, well I didn't sell any cookies either.
The troll responded, well that’s okay for you.

Second reason is, I didn't spend 2 nights at the camping trip when the other parents did.  Even though she knew damn well why I wasn't and she was fine with it a month before.  Not all the parents went on the camping trip.  They dropped their kids off Friday night and hauled ass.
There were like 9 or 10 girls and 4 adults.

Troll sent out text messages asking who was all going to the Nick Hotel, I replied simply, “Emilie and I will not be going.”  She of course replied. Oh, no! That stinks!..

I let it go, I wasn't in the mood to fight with a troll.

She kept bugging Kyley about why I wasn't going.  Kyley would respond, “I don’t know ask Ellen.”
I waited for the text that never came.
I let Kyley know if she asks you again tell her exactly why I’m not going.

She told her and of course the troll denied it.  (This isn't the first time she talked behind parents back) I knew her track record over these last few months.

I finally got a text from the troll explaining that I might have heard some rumor that was going around.  I replied, that yes I had heard the rumor from 2 different people who have no reason to lie about it.  I told her I was done with her troop, that I was too old to deal with bullshit like this.
And, finally that the only thing that my daughter learned from being in her troop was how to scream at others and to roll her eyes. “Thanks for the experience.”

Of course, Kyley’s phone was blowing up all night about it.  To which the Girl Scout troll told her that I could just “Fuck off.”

Wow, she certainly has a way with words.
Every time I have to see her the song from Dora is playing in my head.

♪♪"I'm the grumpy old troll who lives under the bridge.♪♪

I did though, meet one other Mom that I now consider a friend. She actually sold a butt-load of cookies and “deserves” to go on the trip.  I’m sure my ears will be ringing or burning whatever ears do when people are talking about them that weekend.

I think I will sign Emilie up for soccer or dance next year.

Thanks for reading.
xoxo
at 8:48 PM
Email ThisBlogThis!Share to TwitterShare to FacebookShare to Pinterest
Labels: Oops someone pissed me off.