Sometimes I wonder what the hell took me so long to fall in love with reading.  All those years I was staring at a T.V letting it try to entertain me.  When right there was a book that would take me to where ever I wanted to go!

I read a lot, I HAVE to read before I go to bed each night and I really look forward to it.  Since I love to read so much and I have a blog, I signed up with a company called Novel Publicity.

This is the first time I signed up for a blog tour, so I'm super excited to see how it goes.

So, I was sent an email with 3 books,  I could choose one or all to read and review.  I only chose one, because that was the only one that stood out to me. 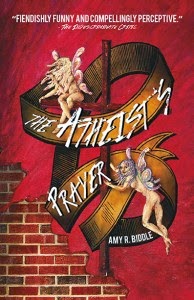 After a solar eclipse, nineteen people were found dead in a remote area of the California National Forest. They were lying in a circle, holding hands and wearing plastic fairy wings. Years later, on the other side of the country, no one in the southern city of Jefferson is concerned about fairies or fairy-worshiping suicide cults. Except for Candy. She might not have proof, but she’s damn sure it’s going to happen again. The problem is, Candy is a coke-dealing stripper and the only person who will listen to her is an alcoholic mall Santa named Hank, who’s only listening because, well…she’s hot. There are seven days until the next eclipse.


Okay, so here is my review of this book...
When I first read the paragraph above, I thought, what the hell?!?  This shit sounds crazy as hell!  I had to know what it was all about.  The author wrote the book in first person, but each chapter is from a different characters point of view.  I thought that I would get confused with all the different characters.  But, the author did and amazing job letting you get to know each character during the story.  After a few chapters in, I knew exactly who everyone was and their personalities.  The book is described as "funny" but it really takes a lot to make me laugh.  (not that I'm an unhappy person)  To be honest, I didn't laugh out loud, but many parts made me smile.  But, hell that was just me, it may make you pee your pants.
By the end of the book, I felt so personally invested in each character and I thought, oh my god. NO!
But, there's a twist my friends!  Who doesn't love a twist?  I sure do.

Looky here.. it's a giveaway

Thanks for reading!
at 12:18 PM
Email ThisBlogThis!Share to TwitterShare to FacebookShare to Pinterest