The early morning moonlight shining through the blinds, wakes up Mr. Knucklehead.
He grunts and groans out of bed and heads into the kitchen and makes his morning coffee to keep him awake at the early hour of 4:30. Sitting in his old Lazy Boy watching and mocking the news anchor who is getting paid to be up at this hour.

Mrs. Knucklehead and her little Knuckleheads wake from their slumber a few hours after.

Coffee isn't even swallowed by Mrs. Knucklehead when her other half orders them all to get dressed, they will be taking a mystery ride today.

Looking outside, Mrs Knucklehead wonders why her husband wants to venture out on such a rainy cloudy day.  "Let's stay home and do laundry." she suggests.

The Knuckleheads drag themselves to get dressed and ready for their day.

All loaded in the car and off in the southern direction, looking for something to do. Something that cost little to no money. Not only were they a family of Knucklehead's they were also very cheap.

The Knuckleheads just moved to this area and haven't even started to discover the little gems that this new land holds.

Little Knuckleheads spot a gigantic playground from the car and squeal for Daddy Knucklehead to pull over so they can run and play.  After, watching the little Knuckleheads, slide, swing, jump and climb for nearly an hour, Mommy and Daddy practically had to drag them back to the car.

Back on the road, they found another place to explore. It turned out to be a huge campground.  Mr. Knucklehead stops the car and goes into the office. After sweet talking the attendant lady they got to explore with an extra $4.00 in their pocket.  Looking at the map, they discover their is an island they can explore.
Jumping out of the car heading for the rickety wooden bridge. 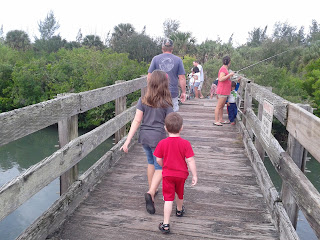 On the other side of the bridge, was the trail they were hoping to explore.  All four excited to start their adventure, they walk a single file line down the dirt path. 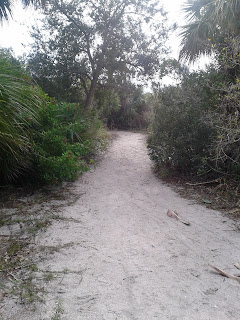 They round the corner and see where the noise is coming from.... 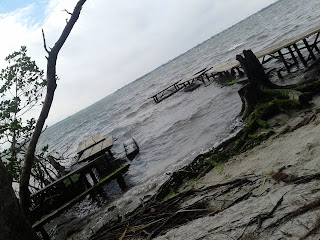 All four excited to see that they finally found a place to wander and take pictures. They notice that there are old picnic benches lined up like a make shift dock.  The little Knucklehead's ask if they can have picnic right there in the water.  Even though their name is Knucklehead the answer to that question was definitely NO! 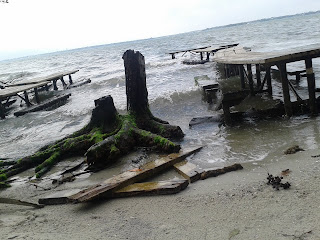 Because of the dreary weather, the water was choppy and loud.  After walking around this area for a few minutes, so Mrs. Knucklehead could take her pictures.  The family moved on to see what else they could find.

Picking back up on their trail, they notice a carpet of pine needles..  Mrs. Knucklehead starts to wonder, how long it's been since anyone has actually ventured into this area.  She kept that thought to herself. 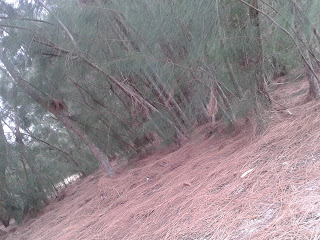 With the roar of the choppy water behind them, and the quiet of the tiny island in front of them.  Sounds of birds all around them.  As they continue on their adventure, they come across part of the trail where bug spray would have been needed. Trying to walk as fast as they could through the tunnel of mosquitoes is when Mr. Knucklehead mentions, "I bet there are Bob Cat's out here."  Luckily the Little's didn't hear him, but Mommy did.. and shh'ed him very quickly.  Mrs. Knucklehead looking behind her every few seconds to make sure she wasn't being stalked.

A few more minutes of walking, they finally reached the other side of the tiny Island. A beautiful tiny beach full of drift wood and shells.  Much more exploring to do right here. 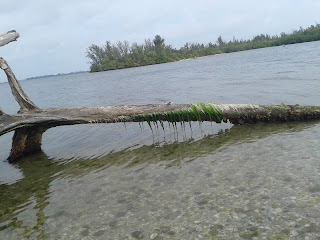 The water was clean and clear, shells everywhere.  The old tree's were beautiful. 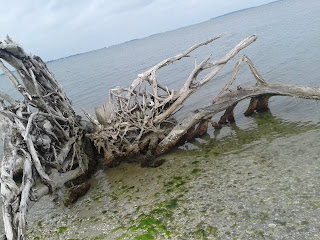 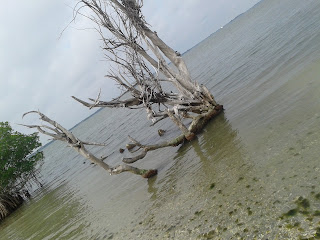 Three of the Knucklehead's walked around, searching, exploring and finding shells.
The littlest Knucklehead picked up a pretty shell.. he examined it and screamed.
Seemed he had found a shell with a hermit crab living in it.  He chucked into the water. 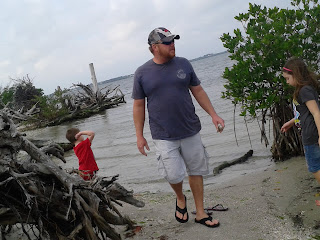 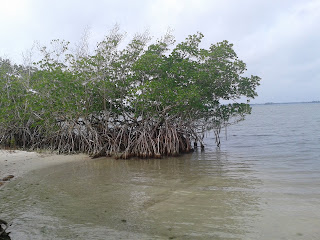 While they walked slowly into the water, Mrs. Knucklehead heard a splash in the water and saw a dolphin swimming and chasing his food.  The Knucklehead's stopped and quietly watched the beautiful creature dive up and down through the cool water.

The dolphin filled it's belly and the Knucklehead's continued to slosh through the clear water, that's when the littlest Knucklehead through a shell and lost his balance and fell face first into the shallow water.  Shocked and cold he got up and started to cry when he lost his balance and fell yet again.
Because, of the giggles and laughs Mrs. Knucklehead didn't get a chance to snap a picture of her wet little one. Thanks to unexpected swim, the adventure was coming to an end.

Back onto the trail, to find their way back to where they started.  This time the journey wasn't filled with laughter and excitement.  This time the walk took much longer due to the little cold and wet Knucklehead whining the whole way.  Back through the tunnel of mosquitoes.. 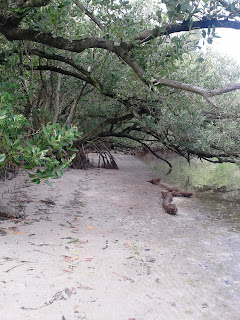 Back to the bridge to a warm towel and a quiet drive home.

They got home just in time to eat lunch and take the Knucklehead nap.

Thanks for reading my story of how we spent our Saturday morning.
xoxo
Ellen

at 8:27 PM
Email ThisBlogThis!Share to TwitterShare to FacebookShare to Pinterest