Do all men think that sex is what makes the world go around? Well I know my man does, he's told me that.

I have a friend who is a girl, (just like me) And yes I think of myself as a girl and not a woman, cause it makes me feel young. Anyway, girls who are friends refer to each other as their "girlfriend". I've seen it on Facebook all over the internet "My girlfriends and I are going on a road trip". So there you go and example with the word in a sentence.
My point, me and one of my "girlfriends" talk on the phone a lot, she used to live in the same city as me but she moved with her family less than a year ago. She's still in Florida., she moved further south.
She and her kids will come up to Ocala to visit and what not. I consider us close friends, and we have fun together.
Chris asks me all the time if we are lesbians!!! WTF... why the hell would he think that? He says cause we always talk on the phone and she visits a lot. Well so fucking what. If I had a damn car, I would go visit her.
So, I just found out today that her boyfriend also makes the lesbian comments to her as well.

Don't get me wrong, I am not homophobic by no means. If you remember in one of my last posts, my best friend who took her own life was a lesbian. So being called a lesbian doesn't really bother me, because I know who I am and who I want to share my bed with.

What pisses me off, is why does that even enter a man's mind??

When Chris makes those stupid little comments, I either just blow him off (not literally) or I'm a smart ass back and say, "Don't be jealous, cause we won't let you watch".
Then he will say, see I knew you were!!!
Whatever!!

It's not just this particular friend either, when I first met Chris by BFF Deb had just passed away 3 months before and I was still mourning. Later in our relationship when I would bring up her name for any reason he would ask me: "Did you and your friend ever do it". And of course I would answer: "What the Fuck.. why would you ask such a stupid question."
That leads me to believe he just thinks when women get together we turn gay/bi ?
Is he just that narrow-minded? Or do most men think that way?

Now, I have to bring up, why don't women think that way? Or at least I don't. When men go for a "guys night" or hang out at the bar. When Chris comes home, I don't ask: "So, did you and (so & so) do a little Sword Fighting tonight". 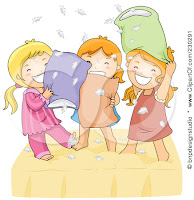 at 3:49 PM
Email ThisBlogThis!Share to TwitterShare to FacebookShare to Pinterest